Remote Controlled appliances--TVs, VCRs, stereos and such that turn on when you push a button on the remote.  We've measured some TVs that use 6 watts (half an amp out of a 12-volt battery) just sitting there waiting for you to push "ON" on the remote!

Plug these appliances into switched power strips and turn them on only when needed.  Yes, this means you must get off your butt to turn the TV on and off, and your VCR will never show the correct time. But you'll save lots of power.

Use either a propane refrigerator or a special energy-efficient refrigerator designed for remote power systems, such as the SunFrost or VestFrost.
Chest freezers are also available in both propane and efficient electric.  The initial cost increase will pay for itself quickly if you use batteries for energy storage.

Example of the perfect energy-efficient, multi-use appliance--Kodiak the Dog 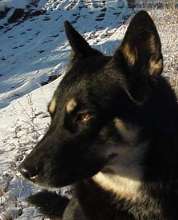 Kodiak  is a truly multipurpose appliance--she saves hot water by prewashing dishes, firewood by helping warm the bed, and electricity by vacuuming food scraps off the floor. Wall Warts--Those ubiquitous black cubes that plug into your sockets.  These force you to make 12 volt DC power to charge your batteries, convert it to 110 volt AC with an inverter (and with power loss), then they convert it back down to around 12 volts DC (again at a loss).  Plus they use power when your printer, charger, laptop computer, etc. is not even on!

Incandescent Light Bulbs--These dinosaurs produce 90% heat and only 10% light.  Halogen lights are only slightly better, but last much longer.

Electric heat in general--Despite what the power company says in their advertisements, electricity is a very poor, inefficient way to make heat if your home is not on the grid. This goes for electric stoves, heaters, coffee makers, air conditioners, water heaters, crock pots, deep fryers, etc.  None of these should be included in an alternatively-powered home.  It does -not- apply to microwave ovens, since they only operate for a few minutes per day,  though at high power draw.

If possible, buy or make 12 volt DC converters for these items (try Radio Shack's multi-voltage universal cigarette lighter adaptor)--then you'll be converting 12 volt DC directly into whatever DC voltage you need with very little loss.  Also, you can at least plug all these warts into a power strip so you don't use power when your item is turned off. 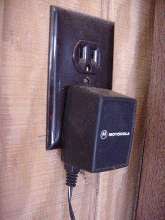 Wall Wart   Early to Bed, Early to Rise  makes a man healthy, wealthy and wise  (and saves lots of power in the winter)  We're not kidding!  Around 40 degrees lattitude where we are, you can expect only half as many full-sun hours in December as in June.  Add to this increased use of lights during long winter nights, and you'll find that Ben Franklin's adage will also save lots of electricity.    Phantom Loads--Any appliance that draws power even when turned off.  Includes the TVs and VCRs with remotes mentioned above, anything that has a clock (microwave, clock radio), and anything where you touch a button to turn on the power instead of just flipping an old-fashioned switch, even such innoccous items as washing machines.

City Slicker Habits-- We're not joking here either. People who move to a remote area and expect to run their solar-powered house the same way they did in town are in for a rude surprise (ruined batteries).  Those of you who have spent a year or more reading by kerosene lamp or candle, hauling water in 5-gallon buckets, and using a stereo powered by AA batteries will marvel at how wonderful even a single solar panel and battery are--and will conserve power to keep the system working for as long as possible!

Again, use a power strip or wire a switch to the outlet where such things are plugged in. Phantom loads also wreak havoc on inverters.  If the inverter is designed to shut down at night to save power, they will keep it on. Buy a clock that runs on AA batteries instead of AC power.

Be aware of your power use at all times.  Turn off the light every time you leave the room.  Early to bed, early to rise for the whole family, at least in winter.  In the bathroom, if it's yellow, let it mellow; if it's brown flush it down.  Do all your power-intensive chores (vacuuming, washing machine, power tools, water pumping) when the generator is running.  Make your spouse and kids pay attention too, even to the point that they call you "the Power Ogre."  Make your family generate their own power on a treadmill or bicycle generator to watch  TV or movies...at least until divorce is threatened!

The Lawrence Berkeley National Laboratory calculated that phantom loads waste the equivalant of the output of 5 power plants each year! 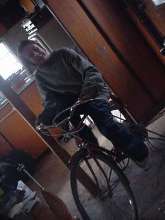 Liz generating electricity to power the TV  and VCR.  The kids complain and call me the Power Ogre; we compromised and made their mother exempt from this requirement for watching movies. Click here for plans on making this bicycle. Regular electric grid customers in our area can voluntarily pay more for their electricity in order to subsidize wind power plants in Northern Colorado. The concept has caught on quickly.